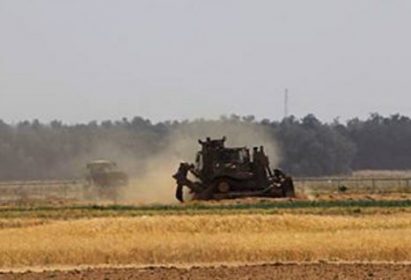 Several Israeli military vehicles and bulldozers invaded, on Wednesday morning, Palestinian agricultural lands in Beit Lahia, in the northern part of the Gaza Strip, and uprooted parts of them, close to the border fence.

Media sources in Beit Lahia said four armored bulldozers and several jeeps, stationed in the Zikim military base across the border fence, invaded the farmlands and bulldozed them.

The soldiers also used smoke bombs to cover their invasion, before advancing dozens of meters into the agricultural lands.

The invasion is part on ongoing violations and invasions into border areas in the coastal region, in addition to the frequent assaults against the fishers and their boats, in Gaza territorial waters.

The army also killed a young Palestinian man, and injured another, after the soldiers fired several live rounds at a Palestinian car in the town of ar-Ram, north of occupied East Jerusalem.

In related news, the army invaded the town of al-‘Isawiyya, in the center of occupied Jerusalem, searched several homes and kidnapped seven Palestinians and one near Hebron.

On Wednesday at dawn, the soldiers kidnapped two Palestinians in the West Bank districts of Bethlehem and Tulkarem, after the army invaded several neighborhoods and searched homes.