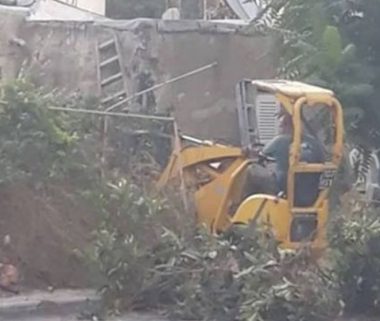 The colonizers invaded the area, accompanied by representatives of the so-called Absentee Property Custodian Department, invaded the area, and illegally confiscated a private Palestinian land, owned by Abdul-Razeq Sheikh, the Maan News Agency has reported.

The land is the front yard of the Palestinian home, and is approximately 50 square/meters.

The soldiers started bulldozing the land, and uprooting its trees and saplings, without a court order.

These Palestinian refugees left behind a great deal of property and the Absentee Property Law has served as the legal basis for transferring such property into the possession of the State of Israel.| Read More – The Norwegian Refugee Council