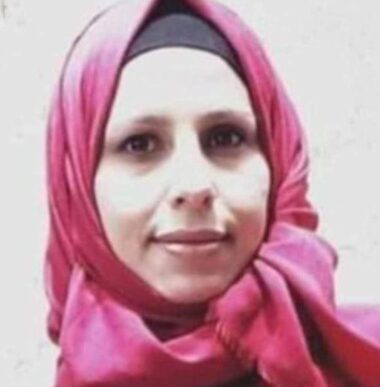 An Israeli colonialist settler killed, Wednesday, a Palestinian woman near the illegal Kiryat Arba colony, in Hebron city, in the southern part of the occupied West Bank.

Palestinian sources said the colonist shot Wafa’ Abdul-Rahim Barade’ey, 34 while walking on the main street near the colony before the soldiers rushed to the scene and prevented Palestinian medics from approaching her.

The settler, identified by locals as a man named ‘Ofer’ from Kiryat Arba known for harassing the Palestinian residents of Hebron, killed the mother of five in cold blood, then put his gun near her corpse on the ground to try to make a false claim that she was a threat.

The woman was killed instantly in the attack, and Israeli soldiers took her corpse after refusing to hand it to the Palestinian medics.

The woman is a married mother of five children, from Bani Neim town, east of Hebron.

In addition, Israeli colonists attacked Palestinian journalists and injured a reporter, identified as Fadi Khallaf, a cameraman with Palestine TV, as he attempted to document the murder of Wafa’ and the attempt by her killer to frame her.

The colonists also threatened to shoot the journalists with live fire if they did not stop filming and leave the area.

An Israeli military spokesperson tried to claim that Palestinian woman was armed and had opened fire with an M-16 rifle, and some Israeli media outlets took the narrative for granted and even reported the incident was an attempted stabbing attack, pictures from the scene show the woman posed no threat to the soldiers, or anybody else. What they show is an armed paramilitary settler taking a knee to aim before killing her. The gun he used is then seen planted near her body, as if she had been the one holding it.

The framing of Palestinian victims of Israeli shootings is a common occurrence in the West Bank. In most cases, no investigation is ever carried out by the Israeli military authorities which rule the Palestinian Territories under martial law.