Israeli Colonists Attack A Farmer And His Wife Near Salfit 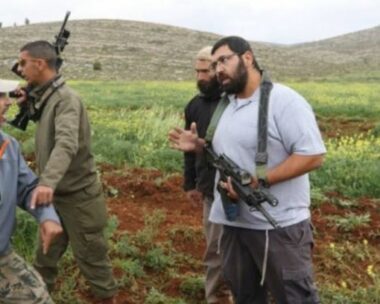 Several extremist Israeli colonists attacked, on Tuesday evening, a Palestinian farmer and his wife while working on their lands in Wadi Qana area in Deir Istiya town, northwest of Salfit, in central West Bank.

Sa’id Zidan, the mayor of Deir Istiya, said at least eighty colonists invaded Palestinian farmlands in Wadi Qana, before some of them started hurling stones at Jihad Khaled Mansour and his wife Amna Abdul-Rahim Zidan.

Zidan added that the colonists attacked the couple before several farmers, and shepherds rushed to their aid.

In related news, Israeli soldiers closed the eastern road of Deir Istiya, and prevented the Palestinians from entering or leaving it.