Israeli Colonists Attack A Home, Many Cars, Near Nablus 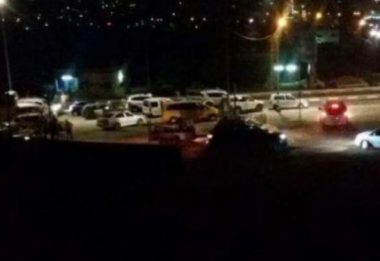 Media sources in Nablus have reported that the illegal colonists surrounded a home in Huwwara, and hurled stones at it, causing damage.

Ghassan Daghlas, a Palestinian Authority official who monitors Israel’s illegal colonialist activities, said the colonists attacked the home of Ahmad Lufti, located at the edge of the town.

Daghlas added that the colonists also attacked scrap yard for cars, near Lutfi’s home, and caused damage to the property.

Furthermore, the colonists hurled stones at Palestinian cars near Huwwara military roadblock, after the soldiers closed it, preventing the Palestinian from crossing in both directions.

The colonists also hurled stones at cars on the main Nablus-Qalqilia road, and obstructed Palestinian traffic.

In related news, dozens of soldiers invaded the al-Lubban ash-Sharqiya village, south of Nablus, and distributed leaflets threatening constant punishment and invasions if the Palestinians do not stop protesting.It is worth mentioning that the colonist settlers also hurled stones at Palestinian cars, near the entrance of Beitin village, east of Ramallah, in central West Bank, causing damage.