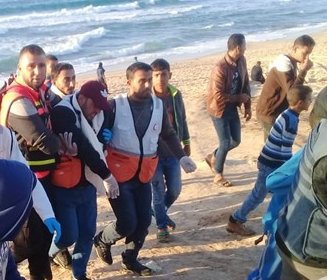 In Gaza Monday, hundreds of Palestinians gathered at the beach in the northern Gaza Strip and headed out to sea on fishing boats bearing signs, banners and Palestinian flags for the 19th weekly protest against the Israeli naval blockade on the coastal Strip.

They were almost immediately met with gunfire from Israeli naval ships stationed just off the coast. The naval officers gave no warning, but began firing on the peaceful protesters as they have every week for the past nineteen Mondays of protest.

Among those injured Monday were a Palestinian paramedic who was hit with a tear gas canister, and a young Palestinian man who was struck with a live bullet while participating in the protest.

Local sources report that the Palestinian protesters began their ‘naval march’ in the northernmost beach in Gaza, near the border with Israel. Before they could make it very far into the water, the Israeli forces used live ammunition, tear gas and concussion grenades to suppress the non-violent demonstration.

Palestinians and international supporters have made numerous attempts to break the Israeli naval blockade, which was imposed in June 2007. Protests have also attempted to bring international attention to the plight of the people of Gaza, who are facing 60% unemployment and the impossibility of maintaining an economy and livelihood under the crippling Israeli siege.

According to the United Nations Office for the Coordination of Humanitarian Affairs, “Israel has imposed movement restrictions on the Gaza Strip since the early 1990’s. Restrictions intensified in June 2007… when Israel imposed a land, sea and air blockade on Gaza, citing security concerns. Despite relaxation of some blockade-related restrictions in recent years, 1.8 million Palestinians in Gaza remain ‘locked in’, denied free access to the remainder of the territory and the outside world. The blockade has undermined the living conditions in the coastal enclave and fragmented the oPt and its economic and social fabric. The isolation of Gaza has been exacerbated by restrictions imposed by the Egyptian authorities on Rafah, its single passengers [sic] crossing.”

In August, when the Boat March of Return began, one of the protest organizers, Adham Abu Selmeya, told reporters from the Reuters News Agency, “We want the world to see the reality of the blockade and the suffering of the people of Gaza, and we will not accept anything less than lifting the blockade once and for all”.