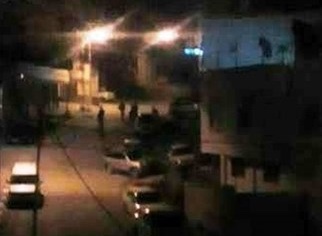 A number of extremist Israeli colonists attacked, on Friday at night, a Palestinian home in Hebron city, in the southern part of the occupied West Bank.

Media sources in Hebron said the colonists hurled stones and concussion grenades at the home, while Israeli soldiers, extensively deployed in the area, did not attempt to stop them.

Such attacks have recently witnessed a serious escalation in Hebron city, targeting the Palestinians, their homes and property.

It is worth mentioning that there are more than 700 Israeli colonists, living in illegal colonies and outposts, in the center of Hebron city alone.

Approximately 37.000 Palestinians live in the same area, and suffer constant assaults and violations, in addition to ongoing military invasions and roadblocks, restricting their freedom of movement, and isolating entire area.