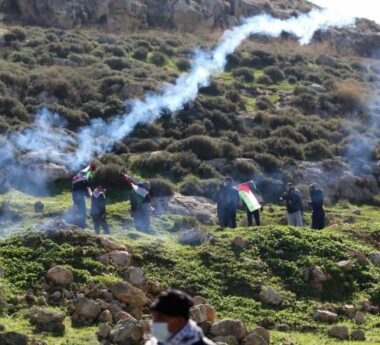 Daghlas added that the colonists assaulted many Palestinians who tried to defend their lands and prevent them from illegally annexing their lands.

Israeli soldiers arrived at the scene, and started firing gas bombs, concussion grenades and rubber-coated steel bullets at the Palestinians.

It is worth mentioning that Khan al-Lubban area houses a historic site dating back to the early Ottoman era, and is surrounded by about 300 Dunams (74.13 Acres) of Palestinian lands.

This is not the first attack against the site, and its surrounding Palestinian lands, especially since the colonists are trying to annex it to establish news outposts.

In related news, many colonists attacked Palestinian shepherds in the ath-Tha’la area, east of Yatta town, south of Hebron.

Rateb Jabour, the coordinator of the Popular Committee against the Annexation Wall and Colonies in Hebron, said the colonists assaulted the Palestinian shepherds and prevented them from entering a grazing area.

The colonists hurled stones at the Palestinian shepherds and attacked some of them with batons.

The attack took place in an area where Israel has been issuing demolition orders targeting Palestinian homes and structures, while the soldiers and the colonists have already uprooted and bulldozed land.