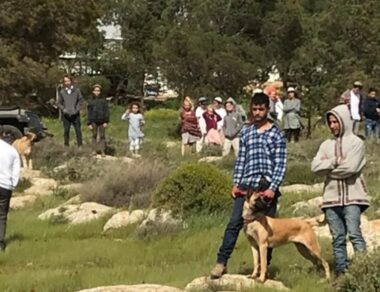 Groups of illegal Israeli colonists continued, Saturday, their violations and escalation against the Palestinians, and attacked farmers near the southern West Bank city of Hebron, in addition to Shepherds in the Northern Plains.

Rateb Jabour, the coordinator of the National Committees against the Wall and Colonies in southern Hebron, said many colonists assaulted Palestinian farmers from the Nawaj’a local family, near Um Lakhous community.

He added that the colonists attempted to prevent the Palestinians from plowing their lands, and assaulted them with batons, leading to a scuffle.

Many Palestinians suffered cuts and bruises to various parts of their bodies, and received the needed treatment by local medics.

The colonists also attacked Palestinian farmers in their own lands, in Masafer Yatta area, southeast of Hebron.

Jabour called on various local and international human rights and legal groups to intervene and stop the seriously escalating violations, especially since these assaults take place in front of Israeli soldiers who just stand and watch, and in many cases start assaulting the Palestinians in addition to firing at them.

It is worth mentioning that the attacked area witnesses repeated Israeli violations, including the uprooting of olive trees.

On Saturday evening, the colonists assaulted many Palestinian shepherds in Um al-Abar area, in the West Bank’s Northern Plans of the Jordan Valley.

Mo’taz Bisharat, a Palestinian official who monitors Israel’s colonialist activities in Tubas, said the colonists, known a “hilltop youth,” assaulted the shepherds in their tents in while resting and guarding their livestock.

Bisharat added that the colonists are constantly attacking the Palestinians, in addition to installing and attempted to establish a new outpost.