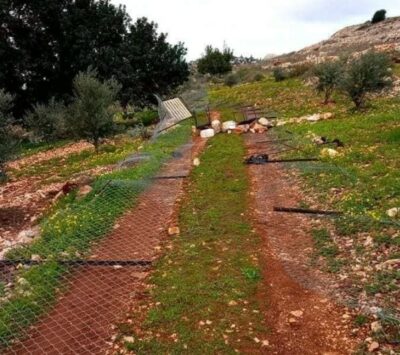 Mohammad Naji, the Mayor of Kafr ed-Deek, stated that the colonists invaded more than sixty dunams of farmlands, owned by Atallah Ali Ahmad in the Deeriyya area, in the western part of Salfit.

He added that the colonist destroyed trees and crops in the invaded lands and closed the roads leading to them in addition to posting leaflets warning the Palestinians against entering those lands. Naji stated that the colonizers first placed rocks on roads leading to the privately-owned Palestinian lands, before destroying their fences and invading them.

Salfit governor Abdullah Kamil called on various international legal and human rights groups to intervene and ensure ending the escalating crimes and violations carried out by the illegal colonizers and the soldiers against the Palestinians and their property.

It is worth mentioning that, a few days ago, the colonizers invaded and illegally occupied four Dunams of Palestinian lands and cut more than twenty-five olive trees.