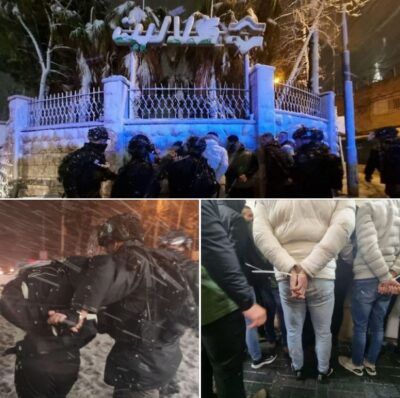 Many Israeli soldiers and police officers invaded, on Wednesday at night, a coffee shop in the at-Tour neighborhood, in occupied Jerusalem, and abducted at least thirty young men, in addition to summoning the owner for interrogation, the Wadi Hilweh Information Center In Silwan (Silwanic) said.

The shop owner told Slwanic that soldiers invaded his shop, started questioning him about why his shop was open, and told him that he needed to close it, and head to a police station for interrogation, without providing a reason or justification.

He added that the soldiers and the police abducted at least thirty young men in the coffee shop, and in front of it and took them to an interrogation facility.

The military and the police provided no credible justification for their invasion, the closure of the shop, and the abduction of the young men.

The shop owner said that many Palestinians were outside the shop, happy with the failing snow and playing in the snow, just having fun before the soldiers and the police invaded the area.

The invasion and abduction led to protests in at-Tour, Bab al-‘Amoud, and several parts of the occupied city before the soldiers attacked the protesters with rubber-coated steel bullets, gas bombs, and concussion grenades.