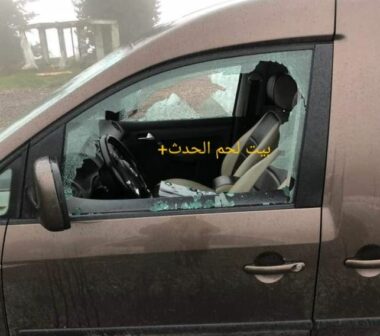 On Thursday, several fanatic Israeli colonists, illegally squatting on Palestinian lands, attacked a Palestinian car near Gush Etzion colonialist block, south of Bethlehem in the occupied West Bank, and smashed its windows, caused damage to doors, in addition to puncturing its tires.

The Palestinian owner of the car, No’man Ahmad Mousa, said he parked his car near Gush Etzion, before heading to work in Jerusalem, and added that when he returned, he found all his tires slashed, and his car’s windows broken, in addition causing damage to the doors of the vehicle.

He added that the Israeli colonists have recently escalated their violations against the Palestinians and their cars, especially while driving on the bypass road #60, near Etzion Junction.