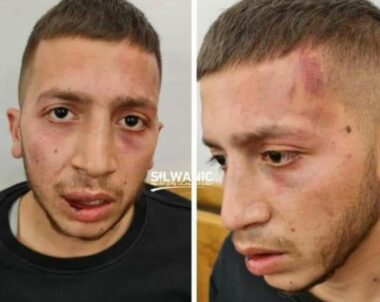 Israeli soldiers abducted, Thursday, at least twelve Palestinians, including one who was repeatedly assaulted by the army, in several parts of the occupied West Bank.

In Bethlehem, south of occupied Jerusalem in the West Bank, the soldiers stormed and ransacked homes in the al-Khader town, south of the city, before abducting Ahmad Mahmoud Salah, 41, and his nephew Ahmad Hasan Salah, 20.

In addition, the soldiers invaded Anata town, northeast of Jerusalem, and abducted a young man, identified as Ahmad Yousef Oleyyan, after invading his family’s home and ransacking it.

The soldiers also abducted Tareq Marwan Obeid in the al-‘Isawiya town, in Jerusalem, and repeatedly assaulted him causing various cuts and bruises, before releasing him later.

In Nablus, in northern West Bank, the soldiers stormed and ransacked homes in Sebastia town, northwest of the city, and abducted Mofeed Mohammad Shehab, 28, Khaled Nadi Azem, 21, in addition to Shaher Arafat Kayed, 18.

In Jenin, in northern West Bank, the soldiers abducted Saif Ali Abu Obeid, from the city, in addition to two former political prisoners, identified as Majdi Raja Abu al-Wafa and Ahmad Fathi Hweil, after invading and searching their homes in Jenin refugee camp.

In related news, the soldiers invaded the al-Yamoun town, west of Jenin, before storming the home of Raed Salah Abu al-Hasan, and confiscated his electricity generator.

The soldiers also fired many gas bombs and concussion grenades in Jenin city, in addition to installing many roadblocks in various areas of the governorate.

In Ramallah, in central West Bank, the soldiers abducted Ghassan Husam Karaja, 30, from his home in Safa village, west of the city.

Many army jeeps also invaded Shuqba village, west of Ramallah, and Jabal at-Tawil area in the eastern part of the al-Biereh nearby city, and provocatively drove around their streets and alleys before withdrawing.