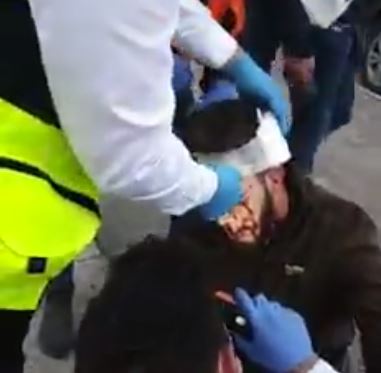 Media sources said the teen, identified as Mohammad Hasan Abu al-Hummus, 17, was walking in the French Hill area when the colonists attacked him.

They added that the teen was wounded to several parts of his body, especially the head of face, when the colonists assaulted him by hurling stones at him, in addition to kicking and punching him.

The injured Palestinian teen is from the al-Isawiya town, in Jerusalem. Israeli medics were called to the scene and provided him with the needed treatment.

In related news, the soldiers attacked, Sunday, many Palestinian workers near the Annexation Wall, west of the northern West Bank city of Jenin.

In addition, the soldiers invaded Ta’nak village, west of Jenin, before storming and ransacking the home of Mo’taz al-Muhur, and interrogated him along with his family.

Furthermore, the soldiers abducted, Sunday, at least seven Palestinians from several parts of the West Bank, including the occupied capital, Jerusalem.