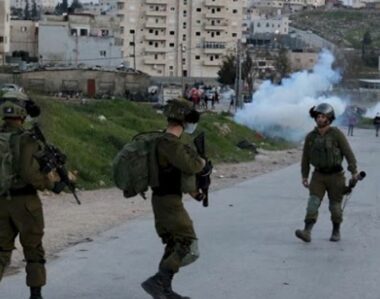 Media sources said dozens of soldiers invaded Kafr ‘Aqab, and the nearby al-Matar Street, before closing many roads, leading to protests.

They added that the soldiers fired many gas bombs and concussion grenades at the Palestinians, in addition to a few surrounding stores and homes.

The soldiers also stopped many Palestinians and interrogated them while inspecting their ID cards.

In related news, the soldiers attacked many Palestinian workers near the Annexation Wall, west of the northern West Bank city of Jenin.

In addition, the soldiers invaded Ta’nak village, west of Jenin, before storming and ransacking the home of Mo’taz al-Muhur, and interrogated him along with his family.