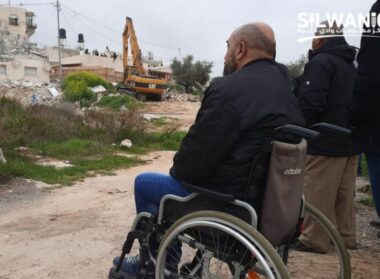 Israeli soldiers demolished, Monday, the home of a wheelchair-bound Palestinian man and his family in the al-‘Isawiya town, in the occupied Palestinian capital, Jerusalem.

The head of the Follow-Up Committee in al-‘Isawiya, Mohammad Abu al-Hummus, stated that the soldiers invaded the town, before surrounding and isolating a neighborhood in its eastern area.

He added that the soldiers then forced the family of Hatem Hussein Abu Ryala, a wheelchair-bound man, out of their home and demolished it, under the pretext of being built without a permit.

The soldiers attacked the family and pushed them around while removing them from their property, before destroying it.

“Where are we supposed to go; this is our home, built on our land, but they want to keep demolishing our homes so that they can continue to build and expand their illegal colonies,” the mother said. The man, Hatem Abu Ryala, said his property was demolished the first time in the year 2009, and added that during the demolition and the assault against the family, he fell from high altitude an issue that led to paralysis due to fractures in his spinal cord.

Despite his injury, he was also imprisoned and ordered to pay a high fine, under the pretext of building without a permit.

It is worth mentioning that the building was demolished six times since the year 2009, including when it was last destroyed in 2019, although the family’s land is in a zoning area dedicated for construction.

Hatem said that he was surprised by the sudden invasion and attack by the soldiers and personnel of the city council, especially since he received assurances, that as long as he continues to file the needed paperwork his property will not be destroyed, however, the soldiers demolished it anyway.

One week ago, the occupation demolished a two-story residential building containing four apartments for Al-Aqsa Mosque guard Fadi Elayan and his family also in al-Isawiya.