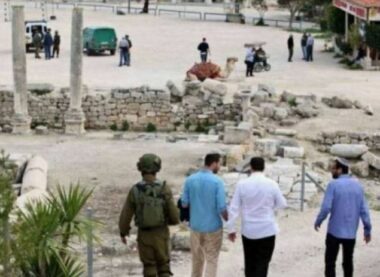 A large group of illegal colonialist settlers accompanied by many Israeli soldiers invaded, Wednesday, the archeological area in Sebastia Palestinian town, north of the northern West Bank city of Nablus.

Mohammad Azem, the mayor of Sebastia, said the colonists invaded the archeological area after the soldiers surrounded and isolated it, preventing the Palestinians from entering it and its surrounding area.

He added that several army jeeps invaded the town several hours earlier, before storming and searching many homes, in addition to using the rooftops of some of them as monitoring posts.

Azem also said that the colonists have been invading Sebastia every week, accompanied by the soldiers, who also close roads to block Palestinian traffic, in addition to invading homes.

It is worth mentioning that the soldiers frequently invade Sebastia to accompany groups of illegal Israeli colonialist settlers into the archeological site, an issue that leads to protests, and injuries.