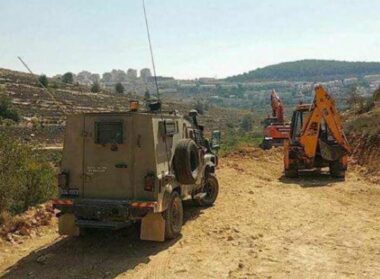 Ahmad Ghazal, the deputy head of Kisan Village Council, said the colonists came from the illegal Maale Amos outpost, which was installed on stolen Palestinian lands, and were accompanied by Israeli soldiers.

Ghazal added that the colonists dug and uprooted nearly four kilometers of Palestinian lands, in preparation for the new road which would also lead to the illegal annexation of hundreds of Dunams.

The official also said that the lands were previously dug and uprooted as part of the constant efforts by the colonists to prepare for a new road that would link between Maale Amos and Avi Hanahal colonies.

All of Israel’s colonies in the occupied West Bank are illegal under International Law, the Fourth Geneva Convention, in addition to various United Nations resolutions.