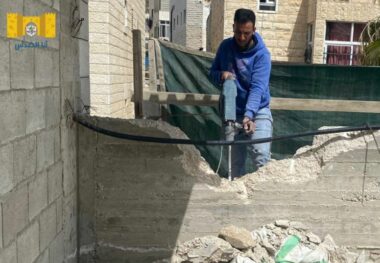 A Palestinian man had to demolish his own home, Sunday, in the al-‘Isawiya town, in the occupied Palestinian capital, Jerusalem, to avoid the excessively high fines and fees.

Media sources said the Israeli authorities recently handed the Palestinian, identified as Raja’e Talal Atiya, an order for the demolition of his home, in the Schools Street, under the pretext of being built without a permit.

They added that the Palestinian filed appeals with Israeli courts but to no avail, and had to demolish his home to avoid the excessively high fines and fees, in addition to the demolition costs, if the City Council uses its own workers and equipment.

It is worth mentioning that the Jerusalem Studies Center for Palestinian and Israeli Affairs, said that the Israeli courts have issued 43 demolition orders in February, targeting Palestinian homes and structures in Jerusalem.

According to data by the Israeli Committee Against House Demolitions (ICAHD), the Israeli authorities demolished 865 structures in the year 2020, displacing 1.014 Palestinians, and directly affecting 5.615 people, in the West Bank, including Jerusalem.

Israel has been issuing dozens of demolition orders against existing Palestinian homes and property, including under-construction structures, and has already demolished many of them, and at the same time continues to retroactively license illegal colonialist outposts, built on private Palestinian lands.