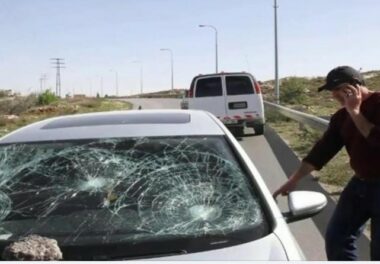 On Sunday evening, Israeli colonizers attacked Palestinian cars and attempted to invade a home near Sinjil town, north of Ramallah, in the central West Bank.

Media sources said the colonizers gathered at one of the main roads leading to the town and hurled stones at many cars, causing damage.

They added that the colonizers gathered near the home of Abu Mohammad Farhan and tried to break into it before the locals forced them away.

The colonizers have recently escalated their violations against the Palestinians and their property in the town by attacking residents, homes, and cars and organizing daily provocative protests amidst heavy military deployment.

In related news, Israeli soldiers on military towers across the perimeter fence in the Gaza Strip fired many rounds and gas bombs at farmers and shepherds, east of Khuza’a town, east of Khan Younis, in the southern part of the coastal region.