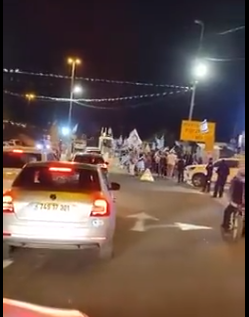 Dozens of Israeli paramilitary colonial settlers attacked Palestinian vehicles at the Za’tara military checkpoint, south of Nablus, on Saturday evening, hurling rocks at the vehicles and vandalizing and damaging them.

This attack on Palestinian civilians, who were waiting at an Israeli-controlled military checkpoint on Palestinian land, was carried out under the protection of Israeli forces.

Wafa News reported that dozens of settlers gathered at the Za’tara military checkpoint, and attacked Palestinian citizens’ vehicles, as a result of which a number of vehicles were damaged, but no injuries were reported.

In addition, dozens of paramilitary settlers gathered at the junction of the town of Kifl Haris, northwest of Salfit, and along the road leading to the Za’tara military checkpoint, under the protection of Israeli forces. They waved Israeli flags and chanted anti-Palestinian slogans.

Groups of Israeli settlers are currently protesting at Shufa Checkpoint at Salfit City northern entrance; The Checkpoint is currently closed on both sides.

In addition, paramilitary settlers stormed the town of Qarawat Bani Hassan, west of Salfit, under the protection of Israeli forces, who closed the entrances to the town.

The paramilitary settlers also closed the Ramallah-Nablus road, after they gathered on the main street at the entrance to the town of Singel, north of Ramallah.

Hundreds of Palestinian civilians were prevented from going to work, home and school, as they were blocked in and held at checkpoints for long hours waiting for the Israeli paramilitary settler gatherings to disperse. Many Palestinians were traveling to see relatives, as Sunday marks the end of Ramadan and the beginning of Eid al-Fitr, a major celebration for Muslims worldwide.