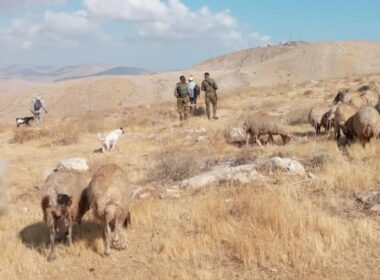 On Tuesday, a group of illegal paramilitary Israeli colonizers attacked Palestinian shepherds east of Khallet Makhoul village in the Northern Plains of the Jordan Valley in the occupied West Bank.

Eyewitnesses said many colonizers invaded the grazing area in the village and attacked the Palestinian shepherds to force them to leave.

They added that several international peace activists witnessed the attacks while accompanying the shepherds.

The colonizers frequently invade the village, especially at night, to attack the Palestinians and their homes, in addition to the constant violations against the shepherds.

The violations have escalated seriously over the past week, leading to damage and injuries.