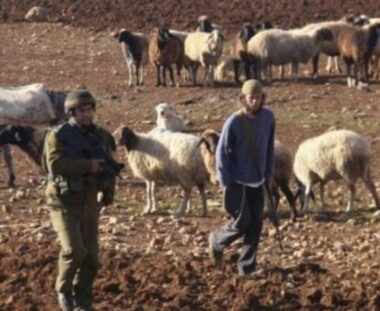 Several illegal Israeli colonizes attacked, Monday, Palestinian shepherds on their lands near Lasefer village, in Masafer Yatta, south of the southern West Bank city of Hebron, wounding one in the head and other parts of his body.

Fuad al-Amour, the coordinator of the Protection And Steadfastness Committees in Masafer Yatta and Southern Hebron Hills, stated that the colonizers came from Talia outpost which was installed on stolen Palestinian lands.

He added that the colonizers hurled insults at the Palestinian shepherds before assaulting them while herding their sheep, and forced them out.

Medical sources said the colonizers injured a Palestinian shepherd, identified as Othman Abu Qbeita, while herding his sheep on his land in Lasefer village.

They added that the shepherd suffered cuts and bruises in his head and various parts of his body before he was moved to a Palestinian hospital, in Hebron.

It is worth mentioning that the small village is isolated behind the illegal Annexation Wall which also led to the annexation of large areas of Palestinian lands.

The residents in that area, all from the Abu Qbeita family, have to cross a military roadblock at a gate of the Annexation Wall every time they want to enter or leave their community.

Last Wednesday, Israeli soldiers invaded the village and confiscated a generator used by a family to provide them with electricity in the community that lacks basic services due to Israeli restrictions.