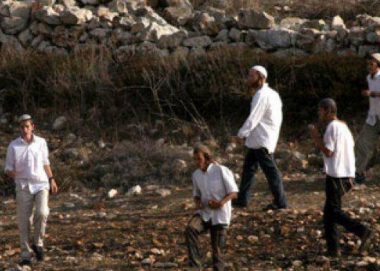 Dozens of illegal Israeli colonizers invaded, Saturday, the at-Tiwana Palestinian village, near Yatta, south of the southern West Bank city of Hebron, and hurled stones at the residents while Israeli soldiers started firing gas at the Palestinians.

The assailants came from Ma’on and Havat Ma’on illegal colonies, which were built on stolen Palestinian lands, and started hurling stones at the residents, leading to scuffles with the locals.

The coordinator of the Popular Committee against the Annexation Wall and Colonies in southern Hebron, Rateb Jabour, said Israeli soldiers were at the scene, and did not attempt to stop the colonizers, but instead started firing gas bombs at the Palestinians.

Many Palestinians suffered the effects of teargas inhalation and received the needed medical treatment.

Jabour added that the colonizers uprooted, Friday, eighteen Palestinian olive trees, owned by Yasser Mousa Rib’ey, in Khirbat al-Kharrouba area, in the village, and shattered the windshields of two cars in addition to causing damage to them. One of the cars is owned by Mousa Jibreel Rib’ey.