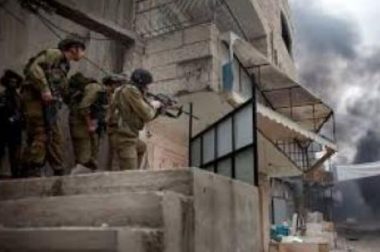 Dozens of Israeli soldiers invaded, on Sunday at dawn, several homes and stores in Doura town, south of the southern West Bank of Hebron, before violently searching them.

The WAFA Palestinian News Agency said the soldiers invaded many homes and stores in Sinjer neighborhood, in Doura, and violently searched them.

Furthermore, dozens of soldiers invaded various areas around Halhoul city, north of Hebron, including in many orchards and vineyards.

The soldiers also stopped and searched dozens of cars at main entrances of several towns, south of Hebron, and interrogated many Palestinians while inspecting their ID cards.

On Saturday, dozens of illegal Israeli colonizers invaded the at-Tiwana village, near Yatta, south of Hebron, and hurled stones at the residents while Israeli soldiers started firing gas at the Palestinians.