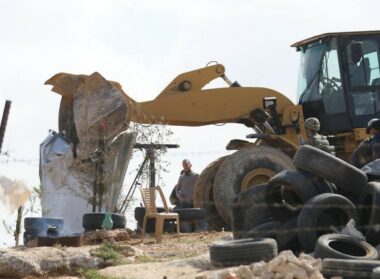 On Sunday, illegal Israeli colonizers bulldozed Palestinian farmlands in the as-Sammoa’ town, south of Hebron, in the southern part of the occupied West Bank.

Rateb Jabour, the coordinator of the National and Popular Committee against the Annexation Wall and Colonies in southern Hebron, said the colonizers invaded and bulldozed agricultural lands in the Wadada area of the town.

He added that the invaded and bulldozed lands belong to members of several families in the town.

Israeli soldiers also invaded the area, attacked several Palestinians who tried to stop the colonizers, and declared the area a “closed military zone.”

Whenever the Israeli occupation army declares Palestinian lands as closed zones, or closed military zones, such orders only apply to the indigenous Palestinian owners of the lands but not the colonizers who continue to roam freely, uproot lands and install outposts.

In Qalqilia, in the northern West Bank, the soldiers confiscated a bulldozer, owned by Mohammad Ahmad Dabour, while working in Wadi Asala, west of Azzoun town, east of Qalqilia.