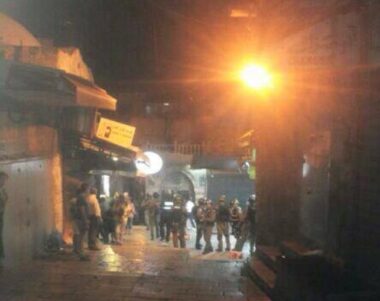 On Wednesday dawn, illegal Israeli colonizers burnt a Palestinian car near the Za’tara Israeli military roadblocks and smashed windows of a mosque and a bulldozer in Orif town, south of Nablus, in the northern part of the occupied West Bank.

Ghassan Daghlas, a Palestinian official who monitors Israel’s illegal colonialist activities in the northern West Bank, said the colonizers attacked a Palestinian car not far from soldiers stationed at the Za’tara military roadblock and burnt it.

Daghlas added that the colonizers also invaded Orif town before attacking the Ribat Mosque and smashed many of its windows, in addition to smashing the windows of a bulldozer owned by Essam Safadi.

The colonizers also attacked and attempted to invade several homes in the area before the locals chased them away. The attacks took place mainly in the eastern area of the town.

Also, the colonizers invaded the northeastern area of Burin town, southwest of Nablus, before the locals intercepted them, leading to scuffles.

Furthermore, many colonizers hurled stones at Palestinian cars on the road between Huwwara and Qalqilia and fired a barrage of live rounds.