Israeli Colonizers Cause Damage To Many Palestinian Cars In Jerusalem 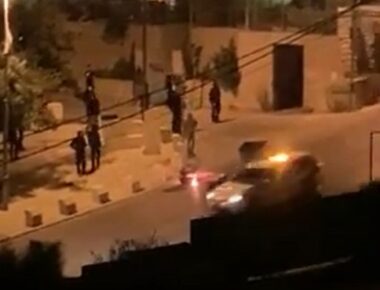 On Sunday dawn, illegal Israeli colonizers attacked dozens of Palestinian cars driving through the Suwwana neighborhood of East Jerusalem, causing damage. A security vehicle for the illegal colony could be seen passing near the colonists without trying to stop them just before they pelted the Palestinian cars with rocks.

Eyewitnesses said the colonizers were inside the vicinity of the colony, built on Palestinian lands in the al-Misrara neighborhood, and gathered at the intersection to attack passing Palestinian cars.

They added that the attack caused damage to several Palestinian cars despite the presence of the security guards’ vehicle that flashed its lights and kept driving without stopping them.

The Israeli police later arrived at the scene and “asked” the colonizers not to gather near the main road but did not arrest or question any of them.

Israeli soldiers also invaded several neighborhoods in the al-Isawiya town in Jerusalem, leading to protests before the army fired many gas bombs, causing several Palestinians to suffer the effects of tear gas inhalation.