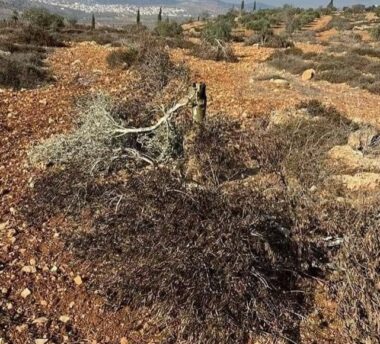 The colonizers, who came from a nearby illegal colony, invaded an orchard owned by Sa’id Shukri Za’tar and cut at least 120 olive trees.

Sa’id said he went to his orchard to continue picking his olive trees and found his trees cut and thrown around.

It is worth mentioning that the orchard is one of many in that area, isolated behind the illegal Annexation Wall but accessible to the colonizers, while the Palestinians need to apply for permits from the Israeli occupation army to enter their lands.

The colonizers constantly invade the isolated orchards, cut trees, and even harvest them before stealing the produce.

On Monday, the Israeli colonizers invaded a Palestinian orchard in Turmus Ayya and uprooted about 100 olive trees.