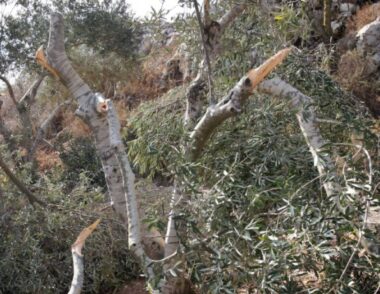 Media sources said the colonizers invaded the al-Harayeq area in Deir Sharaf before cutting and uprooting the olive saplings.

They added that the trees are in orchards owned by Abdul-Rahim Suleiman Za’atri, Abdul-Hamid Awad Zaatari, and Ghazi Fares Zaatari.

It is worth mentioning that, nearly a month ago, the colonizers invaded the same area and uprooted more than 600 trees.

In related news, Israeli soldiers invaded Sinjil town, north of the central West Bank city of Ramallah, and abducted Mousa Osama Tawafsha after storming his home and ransacking it.