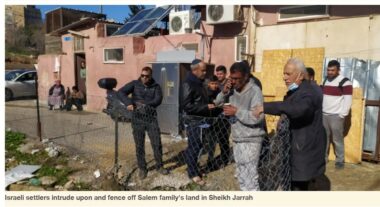 She said that a group of Israeli settlers led by Jerusalem Deputy Mayor Arieh King, under heavily armed police protection, barged their way into the neighborhood, where they re-installed barbed wires around a plot of land belonging to the Salem family as a prelude to seizing it.

She added that the intruders physically assaulted members of the Salem family, inflicting fractures on a woman’s hand.

Police previously warned the family against participating in any solidarity activities denouncing settlers’ attempts to forcibly displace them and take over their house in the neighborhood and quelled such activities during the past month.

On December 16, and a day after settlers fenced off a plot of land belonging to the family for the first time, the Salem family, comprising 11 members, received an order to “evict” them from the house they lived in for over 70 years in favor of colonial settler organizations, who alleged they had purchased the house from Jewish owners who had owned the house before 1948.

Palestinians have maintained that the Israeli occupation authority’s decision to “evict” the families from their houses in favor of the settler groups is politically motivated and comes as part of Israel’s efforts to ethnically cleanse Jerusalemite Palestinians.

Since the occupation of Jerusalem by Israel in June 1967, Israeli settlers’ colonial organizations, including Elad and Ateret Cohanim, have claimed ownership of Palestinian property in Jerusalem. Backed by the Israeli state, judiciary, and security services, these organizations have been working on wresting control of Palestinian property and converting it into colonial outposts as part of the efforts to ensure a Jewish majority in the city, as well as on managing archaeological sites in Silwan and overseeing their excavation. This scheme involves building new colonial tourist sites, such as the “City of David”, to bolster their propaganda.