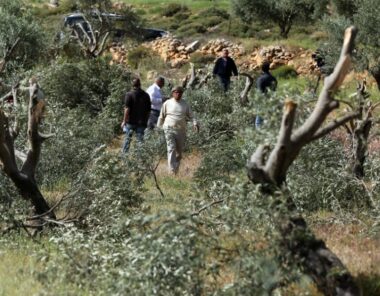 Amin Abu Alia, the head of the al-Mughayyir Village Council, said the colonizers cut and uprooted 60 Dunams of Palestinian lands in orchards near the illegal Adi Ad colony which was built on stolen Palestinian lands.

He added that the Palestinians cannot enter their orchards in that area without prior approval from the army.

The attack was carried out in front of Israeli soldiers who did not attempt to stop the colonizers.

A day earlier, the colonizers uprooted more than 60 Dunams of Palestinian lands in the area which witnesses frequent violations that have recently led to the uprooting of more than 500 olive trees.

Two days ago, the colonizers invaded and harvested a Palestinian olive orchard in Sebastia Palestinian town, northwest of the northern West Bank city of Nablus, and stole the produce.

While the attacks and violations carried out by the colonizers against the Palestinians, their homes, lands, and holy sites are ongoing across the occupied West Bank, they witness a serious escalation during the olive harvest season.