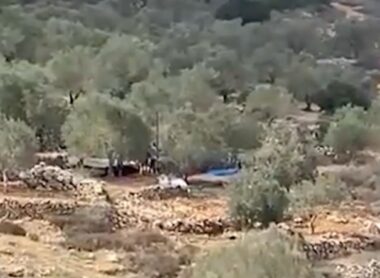 Mohammad Azem, the mayor of Sebastia, stated that the olive orchard is isolated behind the fence of the illegal Shave Shomron illegal colony, and the Palestinians were granted a permit to enter it to harvest their trees, Tuesday.

He added that once Talal Shehada and his family entered their 18-Dunam orchard, they found out that the colonizers have harvested their olive trees and stole the produce.

It is worth mentioning that the colonizers have harvested and stolen, over the last several days, many olive orchards belonging to the Palestinians in the Khirbat Yanoun area of Aqraba Palestinian town, south of Nablus.

Sebastia is subject to frequent Israeli invasions and attacks, especially when the army accompanies illegal colonizers into the archeological area after closing streets and forcing the Palestinians away.

Similar violations took place, two days ago, in Palestinian orchards in Deir al-Hatab village, east of Nablus, by colonizers from the illegal Elon Moreh colony which was built on stolen lands.

It is worth mentioning that the past week witnesses a serious escalation in similar violations in various parts of the West Bank, including attacking the villages, cutting and uprooting trees, harvesting and steeling the produce, especially in various villages and towns in the southern areas of Nablus governorate.

In addition, the soldiers demolished an agricultural shed at the western entrance of Hares town, west of Salfit in central West Bank.