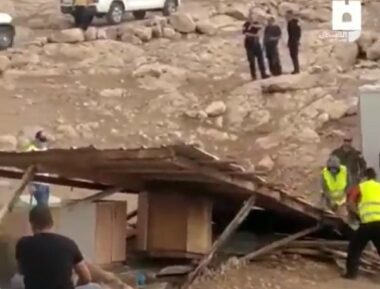 Daoud al-Jahalin, the secretary of the Fateh movement in the Arab al-Jahalin and the surrounding Bedouin areas, said several Israeli army vehicles invaded the area after surrounding and isolating it.

He added that the soldiers demolished a 45-meter residential shed, owned by Suleiman Ibrahim Mohammadain, and was inhabited by him and seven other family members.

After destroying the property, the soldiers confiscated its materials before leaving the area.

Al-Jahallin said the attack is the 57th on repeated Israeli violations that aim at forcing the Palestinians out to replace them with illegal colonies.

Bedouin communities near Jerusalem, in the Jordan Valley, Hebron, and several parts of the occupied West Bank witness frequent Israeli violations, including demolition and displacement, and are prevented from having any infrastructure, including electricity and running water.

In related news, the soldiers demolished an agricultural shed at the western entrance of Hares town, west of Salfit in central West Bank.