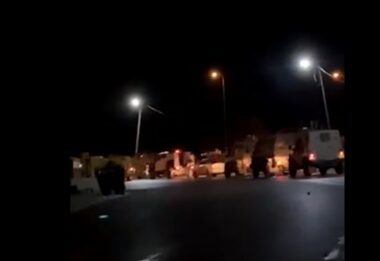 Israeli soldiers abducted, on Tuesday at dawn, eleven Palestinians, including siblings and former political prisoners, from their homes in several parts of the occupied West Bank, the army also shot a young man.

They added that the soldiers abducted Abdullah Ahmad Ekhlayyel, 25, and his brother Saif, 22, from their homes in the town, before taking them to Etzion military base, north of Beit Ummar.

In Hebron city, the soldiers abducted Saleh Ja’bari, a former political prisoner who was held by Israel for fourteen years, after the army invaded his home and ransacked it.

In Ramallah, in central West Bank, the soldiers invaded and ransacked homes in Abu Shkeidim, northwest of Ramallah, before abducting a former political prisoner, identified as Mousa Ladadwa, in addition to Qassam Majd Barghouthi, from his home in Kobar village, north of the city.

In Azzoun town, east of the northern West Bank city of Qalqilia, the soldiers stormed and searched several homes, before abducting a Palestinian father, identified as Ma’moun Qatesh, along with his sons Hazem and Mohammad. 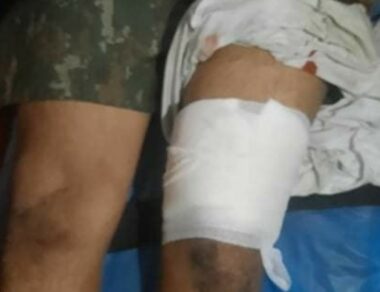 Medical sources in Tubas have confirmed that the soldiers shot one Palestinian with a live round in the leg.

In addition, the soldiers invaded Teqoua’ town, Bethlehem, south of the occupied Palestinian capital, Jerusalem, in the West Bank, and searched a few homes.

On Monday at night, the soldiers invaded Anata town, northeast of occupied Jerusalem in the West Bank, before several protesters hurled stones and Molotov cocktails at the military vehicles, while the soldiers fired live rounds; no injuries were reported.

Late on Monday evening, the soldiers abducted a young Palestinian man and attacked several medics, journalists and pedestrians, causing injuries, in Bab al-‘Amoud area in addition to abducting a child in Silwan town, in Jerusalem.