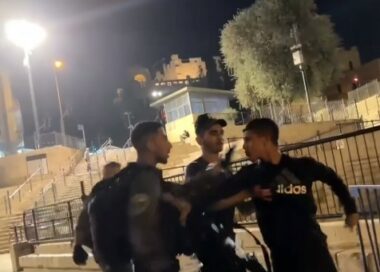 Israeli soldiers abducted, late on Monday evening, a young Palestinian man, and attacked several medics, journalists and pedestrians, causing injuries, in Bab al-‘Amoud area, in the occupied Palestinian capital, Jerusalem, in the West Bank, in addition to abducting a child in Silwan town in the city.

Eyewitnesses said the soldiers assaulted many young men who were sitting and socializing in Bab al-‘Amoud, and chased them away, in addition to abducting a young man.

They added that the soldiers also assaulted and injured several young men, and attacked Palestinian medics who were rendering the needed help to the wounded, before removing them from the area.

Among the wounded was a photojournalist working for the Al-Qastal News Agency, who was injured when the soldiers assaulted Palestinian journalists to prevent them from documenting the violations.

The soldiers also fired concussion grenades at the Palestinians in addition to spraying them with wastewater mixed with chemicals.

It is worth mentioning that dozens of soldiers and police officers were deployed in the areas of Bab al-‘Amoud, Sultan Suleiman Street, Silwan town, and other parts of the occupied city.

Furthermore, the soldiers abducted a child, identified as Sultan Mahran Shweiki, from Silwan town in Jerusalem, and took him to a detention facility in the city.