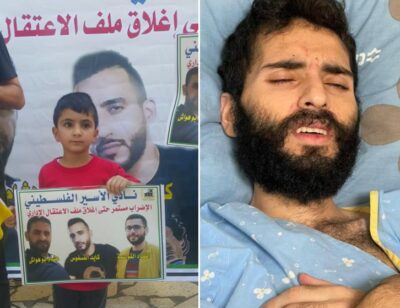 On Monday, the Palestinian Prisoners’ Society (PPS) has reported that attorney Jawad Boulus managed to visit with three of the six hunger-striking detainees, and stated that they are facing serious life-threatening conditions.

Boulus said that one of the detainees, Miqdad al-Qawasma, who started the hunger strike 82 days ago, is facing serious difficulties just to be able to speak, and added that his medical condition is extremely serious.

He added that the Israeli authorities are still refusing to end his arbitrary Administrative Detention orders, holding him captive without charges or trial.

Boulus also visited with Hisham Abu Hawwash, who started the hunger strike 56 days ago, and Shadi Abu Aker, who began the strike 48 days ago, and are both held at the Ramla prison clinic that lacks basic supplies, and physicians.

After visiting with Abu Hawwash, Abu Aker, and al-Qawasma, Boulus said the detainees were brought to see him on wheelchairs as they are unable to stand, and added that they have constant pain, fatigue, dizziness, and serious weight loss in addition to frequent vomiting, and are facing serious difficulties just to be able to sleep.

He added that a hearing was held, Monday, and the Israeli court decided to delay the deliberations until October 19th. The Israeli prosecution is demanding imposing six-month Administrative Detention orders without charges.

Boulos also said that he tried to visit with Ala’ al-A’raj, who started the strike 65 days ago, but he found out that the detainee was moved to an Israeli hospital that is supposed to submit a report about his condition to the Israeli court which will be looking into an appeal against his continued arbitrary detention.

It is worth mentioning that six detainees are ongoing with the hunger strike, protesting the arbitrary Administrative Detention orders; one of them, Kayed al-Fasfous, started the strike 89 days ago.

Furthermore, another detainee, identified as Khalil Abu Arram, has declared a hunger strike, Sunday, while many other detainees intend to join the strike in solidarity with the hunger-striking detainees.