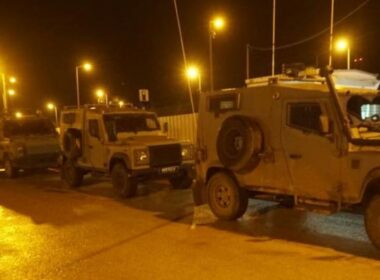 Israeli soldiers abducted, on Tuesday at dawn, two former political prisoners, from their homes in Abu Shkheidim town, northwest of Ramallah, and Kobar village, north of the city, in central West Bank.

Media sources said several army jeeps invaded Abu Shkeidim, before the soldiers abducted Mousa Ladadwa, after breaking into his home and searching it.

They added that the soldiers also abducted Qassam Majd Barghouthi, from his home in Kobar, also after the army invaded the property and violently searched it.

Furthermore, the soldiers invaded Teqoua’ town, east of the West Bank city of Bethlehem, and searched one home before withdrawing.

The town is subject to frequent invasions and violations, including the repeated installation of roadblocks near its schools and the provocative searches of the students, in addition to frequent assaults by the illegal Israeli colonizers.

On Monday evening, the soldiers abducted two Palestinians, including one child, and attacked several residents, medics and journalists, in occupied Jerusalem.