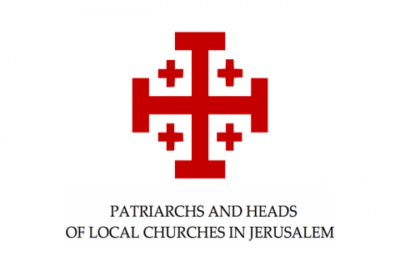 JERUSALEM, Monday, October 11, 2021 (WAFA) – The Patriarchs and Heads of Churches in Jerusalem today condemned the city’s Israeli Magistrate Court’s decision to allow Jews to pray “silently” in Al-Haram Al-Sharif, which houses Al-Aqsa Mosque and the Dome of the Rock, the third holiest site in Islam, considering the decision as an offense on the sole rights of Muslims in the entire compound.

In a statement issued today, the Patriarchs and Heads of Churches stated that such a decision affects the exclusive right of Muslims to their Holy Sanctuary and that the Churches of Jerusalem and their parishioners stand by their Muslim brothers and sisters in this injustice that has befallen upon them.

The Patriarchs and Heads of Churches also affirmed that the Islamic Waqf Department of the Jordanian Ministry of Islamic Affairs, Waqf, and Holy Sanctuaries is the only entity with the right to administer Al-Haram Al-Sharif and to allow or not to allow visits to it.

The Patriarchs and Heads of Churches of the Holy City also indicated that they view this unjust decision and its dangerous repercussions with the utmost seriousness regarding Al-Haram Al-Sharif, the Holy City, and the existing historical and legal status-quo in Jerusalem.