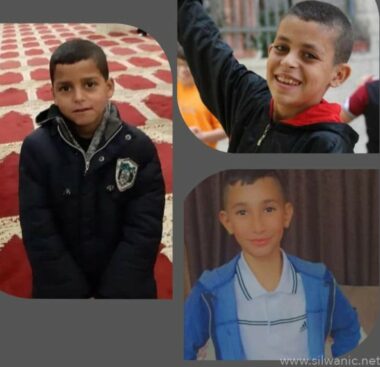 Israeli soldiers abducted, on Tuesday afternoon, three Palestinian children in Silwan and the at-Tour, in the occupied Palestinian capital, Jerusalem. The soldiers also attacked many Palestinians, in Jeruasalem, and abducted a young man, in addition to firing gas bombs, rubber-coated steel bullets, and concussion grenades, and spraying many homes with wastewater mixed with chemicals during ensuing protests.

Firas al-Jebrini, a lawyer with the Wadi Hilweh Information Center In Silwan (Silwanic) stated that the soldiers abducted Mohammad Maher Zeitoun, 13, after breaking into his family’s home in Silwan town, and violently searching it.

Al-Jebrini added that the soldiers also abducted another child, identified as Jihad Kayed Rajani, 10, near his family’s home in Silwan.

Furthermore, the soldiers abducted Ayham Suleiman al-Hadra, 13,  in front of his school while he was heading back home in the at-Tour town.

The three children were taken to an interrogation and detention center in Jerusalem, al-Jebrini said.

On Tuesday at night, the soldiers assaulted and injured a young man, and took him to a detention center in Bab al-Amoud in Jerusalem, Silwanic said.

Silwanic added that the soldiers also attacked many Palestinians in various areas of Silwan and sprayed them along with the surrounding homes with wastewater mixed with chemicals.

Video By Silwanic
The soldiers also invaded Be’er Ayyoub Street, in Silwan, leading to protests, and fired many concussion grenades and rubber-coated steel bullets at the protesters.