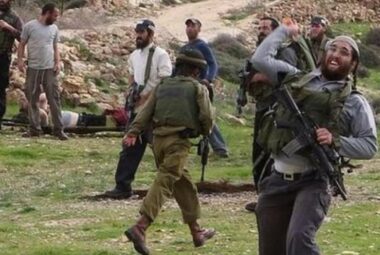 On Wednesday, a group of fanatic paramilitary Israeli colonizers attacked Palestinian farmers picking their olive trees in Jamma’in village north of the central West Bank city of Salfit, wounding one.

Resident Soheib Awad told the WAFA News Agency that, as he and his family were on their olive orchard in the Naqqar area, many paramilitary colonizers invaded his land and attacked the family with pepper spray and baton, moderately wounding his son.

Awad said the colonizers came from the nearby Tapuach illegal colony, built on stolen Palestinian lands.

He added that the Palestinians have been subject to daily violations since the beginning of the olive harvest season.