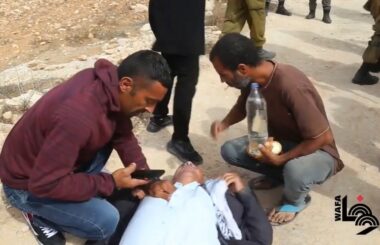 Palestinian medical sources have reported, Friday, that several Palestinians were injured, after a group of illegal Israeli colonizers attacked them during a visit by a delegation from the European Union to Susiya village, near Yatta town, south of the southern West Bank city of Hebron.

Media sources said the colonizers attacked and injured the residents in front of Israeli soldiers, during a visit by a delegation from the EU to the Tiwani and Susiya villages, to observe their daily challenges due to constant Israeli violations. Fuad al-‘Amour, the coordinator of the Protection and Steadfastness Committees, said the colonizers tried to invade the village during the visit of the EU delegation before the residents intercepted their attack.

He added that several Palestinians were wounded, among them Rateb Jabour, the coordinator of the Wall & Colonization Commission, who was injured in the chest and the head, before he was rushed to a hospital.

Before the attack, the EU delegation, and international diplomats, including the EU representative in Jerusalem, visited the Tiwani village and Masafer Yatta, and observed the daily suffering and challenges the Palestinian face due to the constant Israeli violations and the attacks by the Israeli colonizers.