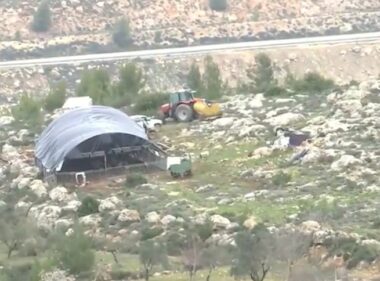 On Tuesday evening, many illegal Israeli colonizers invaded Palestinian lands in Battir town, west of Bethlehem in the southern occupied West Bank, and installed an outpost.

Moammar added that the colonizers closed the area to install the outpost on the private Palestinian lands while Israeli soldiers prevented the locals from approaching it.

The colonizers installed the outpost to illegally occupy the lands and expand it by annexing more privately-owned Palestinian lands.

The area witnesses seriously escalating violations by the colonizers and the Israeli soldiers who constantly attack the Palestinians and deny them access to their lands.

The lands in the area are a constant target for illegal Israeli colonialist activities, especially since it is near the illegal Gush Etzion colonialist bloc.

The colonizers have been trying to occupy the entire area for many years by constantly invading them and installing outposts, especially since the Israeli army has been preventing the Palestinians from entering or rehabilitating their land.

Once Israel considers the lands to be “deserted,” after barring their Palestinian owners from entering them, it then uses its “laws” to declare them “state lands,” which also facilitates the illegal takeover by the colonizers.