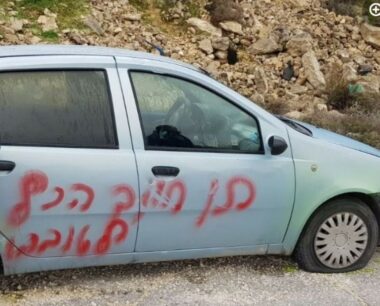 A group of fanatic illegal Israeli colonizers infiltrated, on Sunday at dawn, into Qira village, north of Salfit in the central West Bank, and punctured the tires of seven Palestinian cars in addition to writing racist graffiti.

Ziyada added that the colonizers wrote racist graffiti on the car, including graffiti calling or killing the Palestinians.

Salfit governor, Lieutenant Abdullah Kamil, warned of the seriously escalating by the colonizers against the Palestinians and called on the residents to remain alert.