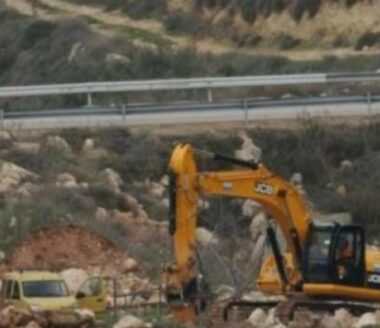 On Monday morning, a group of fanatic Israeli colonizers, illegally squatting on Palestinian lands, began the preparation work for a new segregated colonialist street, on stolen Palestinian lands in the al-Khader town, south of Bethlehem, in the occupied West Bank.

Hasan Breijiyya, the head of the Bethlehem Office of the Wall and Colonization Resistance Commission, stated that the colonizers started the preparation work on Palestinian lands in the Ein al-Qasis area, in the western part of the town.

Breijiyya added that the planned settler-only segregated road would pass through more than 40 Dunams (9.88 Acres) of Palestinian lands that will be illegally annexed.

He also said that, a few days ago, the Israeli occupation army illegally annexed lands in the same area to install iron gates that would isolate dozens of Dunams of Palestinian lands.

Ein al-Qassis has been subject to frequent and escalating violations, starting several years ago, after the soldiers closed the roads leading to it, and imposed severe restrictions on the farmers, in addition to repeatedly assaulting them.

Israel is trying to control and illegally annex the remaining lands in the area for the construction and expansion of its illegal colonies.