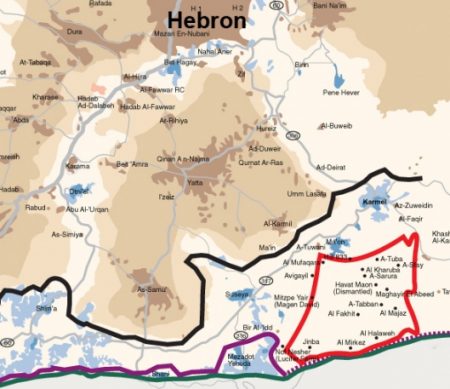 A 26-mile stretch of Wall, 20-feet high and made from cement, has been completed in the South Hebron Hills, in the southern part of the West Bank, according to Israeli sources.

This section of Wall divides the southern part of the West Bank and cements the illegally established settlements put in place by some of the most right-wing extremist groups in Israel.

According to Israeli sources, the section of the Wall that has been completed runs from the Turquimiya Crossing to the Israeli settlement of Mitar.

Palestinians from the village of Yatta, which is being divided by the Wall, were told by Israeli army officials that the Wall is being constructed through their village land as an act of collective punishment, since some young men from Yatta participated in a shooting attack against Israeli civilians in 2016.

Now, according to the local sources, the Israeli military has deemed the entire area a ‘closed military zone’ and is collectively punishing the residents by taking over huge swaths of land and dividing families, shutting off access to farmlands and effectively placing a chokehold on the residents of Yatta and other villages in the South Hebron Hills.

Issa Amro, a Palestinian youth from Hebron and the founder of Youth Against Settlements in Hebron, has organized efforts for years to stop construction of the Wall through non-violent action, telling the Electronic Intifada last year, “Nonviolence is the best tool because it strengthens civil society and it gives a role to each person: the kids, the women, the elders and the youth. With nonviolent activities you get more international support and you neutralize the violence of the oppressor”.

According to the Israeli group B’Tselem, “The policy of the Civil Administration is to prevent construction in nearly all Palestinian villages in the South Hebron Hills. One way this is done is by not preparing master plans that would enable the legalization of existing construction as well as future development.

“The Civil Administration maintains that the master plan in force is the one approved by the British mandatory authorities in 1942. Under that master plan, the area was zoned for agricultural use. However, although the plan does permit some construction on agricultural land, the Civil Administration has misinterpreted the plan’s instructions and has forbidden any and all construction.

“Without approved construction plans, Palestinians are denied any possibility of obtaining building permits, be it for housing or for public buildings such as schools and medical clinics. Nor can they get approval for paving proper roads. In addition, the Palestinians may not hook up to either the power grid or the water pipelines that Israel has laid in the area, even though Israel has connected the settlements to both – including the so-called outposts that were constructed without the proper permits. Although the Civil Administration has prepared several master plans for Area C West Bank Palestinian villages, these plans were in fact aimed at obstructing the possibility of development for those villages. For example, in the early 1990s the Civil Administration prepared a plan for the village of a-Tuwani in the South Hebron Hills. In 2009 the plan was updated and the area it covered was expanded. Contrary to the stipulations in the Jordanian planning and construction law to which Israel is bound, the plan was prepared without a prior planning survey that presents the needs of the village. The Civil Administration plan allocated only 52 dunams [5.2 hectares] to the village and allocated no land at all for future development. Moreover, the plan did not include the entire built-up area of the village so that, if implemented, some existing houses would be detrimentally affected. Meanwhile the Civil Administration plan allocated 385 dunams [38.5 hectares] to the nearby settlement of Ma’on irrespective of the similarly sized populations of the two communities. Furthermore, the plan apparently discounts the fact that a-Tuwani, with its school and medical clinic, services all the surrounding villages.

“Over the past year, the Civil Administration has argued that it cannot approve construction plans in the South Hebron Hills, because they do not meet the planning criteria it has stipulated for the legalization of construction for Area C Palestinian villages. These criteria address the size of the built area; the age and density of construction; proximity to existing communities, nature preserves or archeological sites; and the feasibility of constructing public buildings and infrastructure. These criteria are intended primarily to impede construction in Palestinian villages. They do not take into account the complex structure of land ownership, the history of Palestinian residence on the land (documented at least as far back as the nineteenth century) or the residents’ independent ability to construct public buildings to serve the neighboring Palestinian communities. These criteria do not apply to Israeli settlements in the West Bank for which there is a separate planning track. The construction plans for the settlements in the area, for which the Civil Administration made the necessary changes to the British plans, granted the settlers substantial tracts of land for agricultural use and future development. Moreover, the Civil Administration has not enforced planning and construction legislation in the settlement outposts in the area: Northwest Susiya, Avigayil, Mitzpe Yair, Havat Ma’on, Nof Nesher, Asael and Sansana. These outposts were all established without building plans and without any land allocation. Some were even built on private Palestinian lands.”

All Israeli settlement construction, and the Annexation Wall itself, are considered by the United Nations to be serious breaches of international law, including the Fourth Geneva Convention, to which Israel is a signatory.