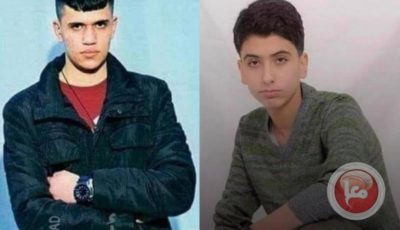 Two prisoners, both of whom were arrested when they were 15 years old, have had extensive sentences handed down by the Israeli Ofer Military Court. The now-19-year-old prisoner, Omar Samir Rimawi, had his sentence changed from 35 years to Life in prison with no possibility of parole. Hi co-defendant, Ahmad Ayoub Obaidah, 19, had his 32-year sentence confirmed by the court.

The two boys stand convicted of a stabbing in 2015 that left an Israeli colonial settler dead. Both were shot and wounded at that time. Both were 15 years old when they allegedly participated in the stabbing atta. Rimawi is from the town of Beit Rima, north of Ramallah, and Obaidah is from Jalazoun refugee camp.

Israeli forces had originally arrested Al-Rimawi on 2/18/2015, when he was no more than 15 years old, and had at the time also arrested Basem Sabah, 18, after the two were shot and wounded, afterallegedly carrying out a stabbing attack in the commercial complex known as “Rami Levy” located in the settlement bloc, Gush Etzion near Ramallah, which killed a settler .

On the same day, the Israeli forces arrested their third friend, Ahmad Obaida, and charged him with assisting the two prisoners of war, as well as Sabah, in carrying out the operation.