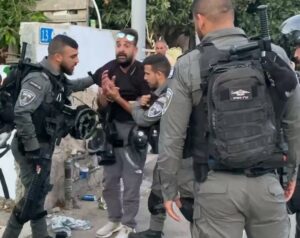 An Israeli court on Friday extended the detention of two Palestinian journalists detained by police in the Sheikh Jarrah neighborhood of occupied East Jerusalem.

The lawyer representing the Palestinian journalists, Jad Qadmani, said the Israeli magistrate court in West Jerusalem extended the detention of Al-Qafiyah television reporter Ziynet al-Halawani and cameraman Wahbi Mekkiye at the request of the prosecutor’s office.

He told Anadolu News Agency that Israeli police brutally attacked the journalists and footage of the attack was presented to the court. “However, the court decided to extend the detention period of the two journalists for a few more days,” he said.

The journalists were detained while on duty late Thursday.

Mekkiye was beaten and sustained injuries while police tried to detain him.

Makkiye and Halawani spent the night in a detention center.