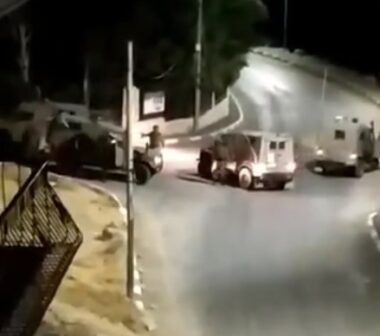 Israeli soldiers abducted, on Monday at dawn, at least nine Palestinians, including former political prisoners, from their homes in several parts of the occupied West Bank, including the occupied capital, Jerusalem.

In Bethlehem, south of Jerusalem, the soldiers invaded the Wad Maali area in the city, searched homes, and abducted Hamza Khaled Ayyad Hreimi, 17, after invading his family’s home and ransacking it.

In Hebron, in southern West Bank, the soldiers abducted a former political prisoner, identified as Baha’ Mohammad Zahda, 41, from his home in the al-Harayeq area. The soldiers also invaded and ransacked homes belonging to members of Zahda and D’eis families.

Another Palestinian, identified as Isamel Talab Nattah, 44, was abducted from his home in Ethna town, west of Hebron.

The soldiers also installed roadblocks at the northern road of Hebron city, in addition to the main entrances of Sa’ir and Halhoul towns, before stopping and searching dozens of cars, and interrogated the Palestinians while inspecting their ID cards.