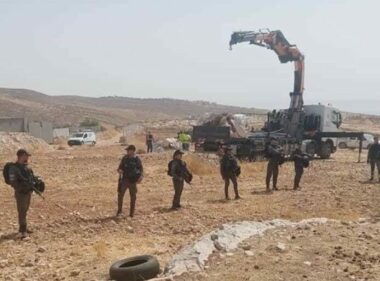 Rateb Jabour, the coordinator of the National Committee against the Annexation Wall and Colonies in southern Hebron, said the soldiers invaded the al-Bweib village, northeast of Yatta, and dismantled four tents owned by Ibrahim Jibrin and Awad al-Mahaina.

Jabour added that two of the dismantled tents are residential, housing fifteen Palestinians from the two families, in addition to two other tents that were used as barns for 100 sheep, owned by the two families.

On his part, Fuad al-Amour, the coordinator of the Protection and Steadfastness Committee in Masafer Yatta and southern Hebron Hills, said the families were left homeless in an area that is subject to constant attacks and violations by the soldiers and the illegal colonialist settlers.

Al-Amour added that the colonists constantly attack the Palestinians, their homes, and their lands in an attempt to force them to leave and illegally annex their lands for the construction and expansion of the illegal colonies.

In related news, the soldiers dismantled a hothouse, owned by Yasser Abu Fanar, in the Za’tout area, northeast of Yatta, and confiscated it.

On Monday at dawn, the soldiers abducted at least nine Palestinians, including former political prisoners, from their homes in several parts of the occupied West Bank, including the occupied capital, Jerusalem.